Over the years, Yazzoom has become a trusted process control & analytics partner for the VPK Group.   Each time we were able to create value from their production data.   One of the most recent projects we’ve worked on concerned a non-conform production problem. Together with the process and automation experts of VPK we’ve managed to solve the problem in a project with an earn-back time of only one month.

Production managers and process control engineers of one of VPK’s paper mills found that the moisture level of the produced paper at one of their paper machines was impacted by pressure drops in the 6 bar steam header that occurred each time one of the bigger paper machines restarted. This lead to a loss of production and increased energy cost.

The production of paper requires steam in order to dry the paper to its pre-defined moisture level. Several steam producers (various coal-fired and gas-fired burners) and several steam consumers (different paper machines) are connected to the same steam headers and an advanced process control scheme is used to balance total production with total demand. Each time a paper machine restarts a sudden increase occurs in the amount of steam that is requested from the steam headers. That sudden demand increase resulted in pressure drops in the steam headers that should be avoided. Therefore Yazzoom conducted an APC audit on this control scheme and the various controllers.

Such an APC audit project typically follows a particular proven methodology consisting of a the following phases:

In the case of VPK, the control performance tool APROMON™ was configured to monitor for a couple of weeks all the control loops involved in this process, to gather production data and to calculate every 4 hours over 25 performance criteria for each of the control loops.  Yazzoom’s experts in process control and data science studied the existing control schemes and implementation, analyzed the production and loop performance data, and came up with a list of probable issues and improvement ideas. Engineers of VPK and Yazzoom translated this result into three types of action items. Firstly, Apromon had identified some PID controllers that could be tuned better. Secondly, Yazzoom’s analysis highlighted some shortcomings in the control implementation and therefore the PLC code was adjusted to solve these issues. Thirdly, a feedforward signal was added such that the steam producers could anticipate better for upcoming sudden increases in steam demand. 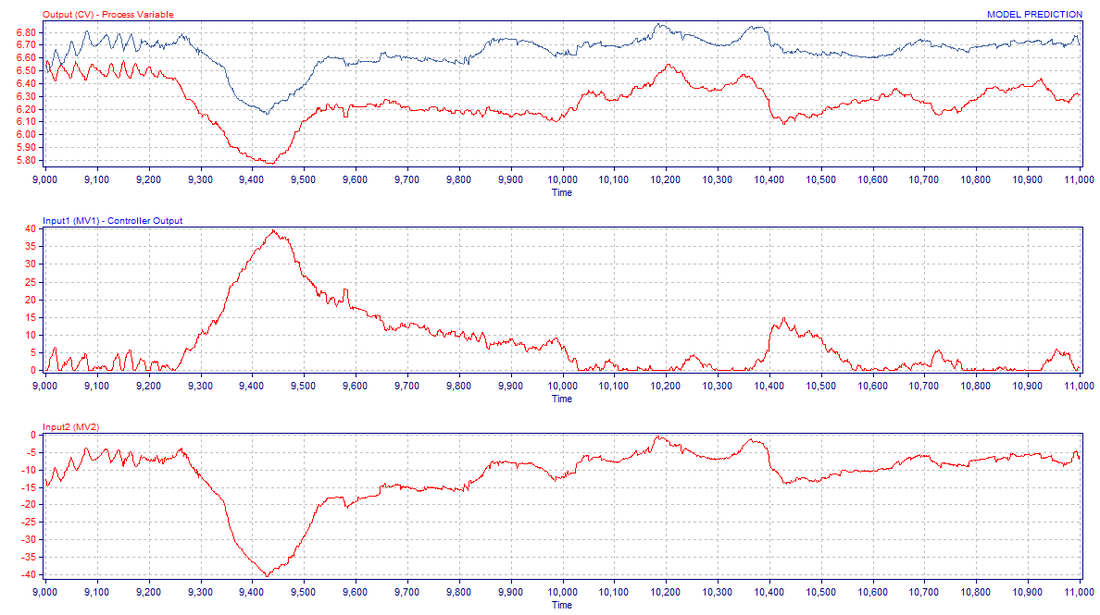 The tuning of the PID control loops was done very quickly by Yazzoom thanks to the use of the transfer function identification and PID & APC tuning tool PITOPS™. The average time to find new PID parameters with the help of Pitops was below one hour. This is made possible through some unique algorithms that allow Pitops to identify process transfer functions on both closed and open loop data and in the presence of measured and even unmeasured disturbances. The result of such a simulation is visualized in the figure above. The upper graph shows in red the real measured process variable and in blue the simulated process variable, the other windows are manipulated variables. The second window shows the MV that controls the process variable and the third window is an additional measured disturbance. It is clear that the simulated process variable in blue behaves the same as the real process variable in red, they are only shifted against each other. This shift is not an issue for the simulation, it only indicates the existence of a fixed unmeasured disturbance. With the resulting transfer function(s) better PID or APC settings are found quickly using computer simulation and automatic optimization.

During the final management presentation, Yazzoom personnel presented a summary of all changes and future opportunities. VPK’s process engineer has calculated that the objectives were reached without any problem and that the ROI (Return On Investment) for this project was less than a month. ROI’s shorter than a year are more a rule than an exception for projects done by Yazzoom. Projects like these are not expensive, because often, just like at VPK, the only things used are expertise and specialized software.  This means there is not necessarily a need to replace or add expensive hardware components, and only software adjustments need to be made.

Yazzoom always works in close collaboration with its clients.  Which almost always offers proven great results with high return on investment.  If you are interested what Yazzoom can do for you, please don’t hesitate to contact us.